Curiosity of the ages on display at RIA 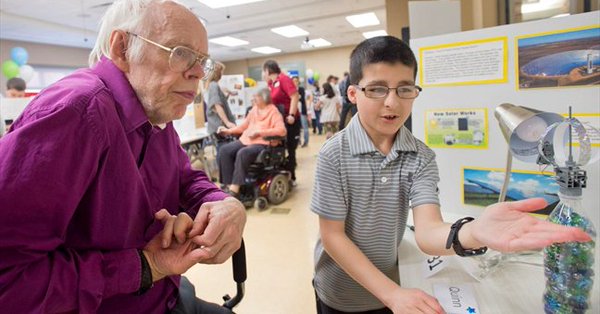 Two scientists among many stand together in the Schlegel-UW Research Institute for Aging discussing the paths that led them down their current course of research. Robert Amelard is a post-doctoral researcher working under the guidance of Schlegel Research Chair Dr. Rich Hughson. On this day, he’s showcasing the technology he developed that uses a camera to display a person’s blood flow in real time; technology that could become a valuable tool in prescreening for cardiovascular disease and other hidden risks inside the body.

Quinn Plummer, the scientist Robert is speaking with, developed a recent interest in solar power generation, and he’s showcasing his research on the principles of solar technology. He’s also researched where Canada fits into the global rankings of solar power production, and found his home country to be sorely lacking. He thinks the Prime Minister should take notice.

Quinn may only be in the fourth grade, but that makes no difference in Robert’s eyes. They chat as colleagues, each discussing the intricacies of the technologies they’re exploring . This knowledge exchange is what scientists do, and it’s why the RIA and the Innovation Team at the Village at University Gates organized an intergenerational Curiosity Fair, where students from public school join RIA researchers and residents from the neighbouring long-term care home for a day of curiosity and exploration.

Beyond the countless research projects currently underway at the RIA, its team wants to inspire young people to consider the impact of research and scientific exploration on real life, while also challenging some of the typical stereotypes that plague older adults and long-term care residents. This Curiosity Fair is the perfect place to do this with residents showcasing the benefits of active lifestyles and nutrition, for example, or information on Parkinson’s disease, while researchers and students share their passions. Other University Gates residents, like Quinn’s great grandfather, simply wander the aisles chatting with all the scientists at their displays, enjoying the buzz of activity.

“I was not nearly as advanced as these kids here are with their projects,” Robert says with a smile when asked if he was a scientist like Quinn in his younger days. It’s noted that this day isn’t a competition, for the value is found far beyond the projects on display.

The value is in connecting generations.

“I think there should absolutely be more of these intergenerational events,” Robert continues, “be they the Curiosity Fair or anything else that brings young to old to bridge the gaps and have these conversations.”

Quinn says he is simply happy to be part of the day chatting with young and old alike about solar panels, astronauts, robots and volcanoes, the same as any nine-year-old might. “It’s crazy,” he says, looking around the busy room, and his grandmother smiles.

She points out that Quinn comes by his curiosity honestly. His grandfather was a professor of chemical engineering at the University of Waterloo, and when speaking with Quinn it’s clear he’s got the same hunger for knowledge.

Who knows? He or any of the other children that have come to the RIA for the fair may one day hold one of the research chair positions and help find a path to a healthier way of aging.

The possibilities among curious minds are endless.

Photo courtesy of The Record.