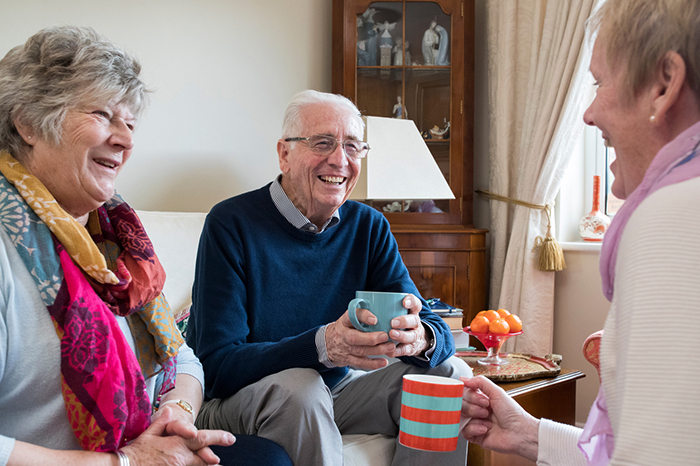 It’s no secret that meaningful relationships are critically important to the health and well-being of any human being. We are social creatures that thrive on shared connections, yet many older adults are at risk of missing out on these crucial relationships as their health and mobility changes.

Through 2017 a team of researchers led by the RIA in partnership with the universities of Waterloo, Exeter (UK), Queensland (Australia) and Carleton University in Ottawa looked at the risk of social isolation through the lens of technology. With support from the Elder Technology Assistance Group (ETAG) and 48 residents in five Schlegel Villages, the researchers explored whether or not social interaction through technology can enhance well-being among older adults.

The study found that residents in both ETAG training groups felt they had increased life satisfaction, overall feelings of competence, and positive attitudes towards computers over the course of the project. Beyond these findings, the study also concluded that residents in the newspaper group also had greater life satisfaction after the two-month study; in fact they liked the group so much they continue to meet weekly, a year after the study concluded.

As an assistant research coordinator with the RIA, Amy Mathrau watched the study unfold and says this project resonated deeply with her in large part because of the social connections she saw unfolding. She was able to spend time with the newspaper group, for example, and says “a lot of the residents in that group didn’t know each other before the club.” A year later, however, “some of them have become really good friends.”

The findings, according to the executive report, “suggest that technology training groups may be an effective way for older adults to become more comfortable in using computers as a means for social interaction, and that the benefits of these groups may extend to overall improvements in mental health.

“However, even with the technology aspect missing, identifying with others in a social group (e.g. newspaper club) likely encourages greater life satisfaction and cognitive health as well.”

Amy points out there is a lot of information to be gleaned from the study results, but ultimately, “if there is an option to bring technology into a home then it would be worthwhile because it’s proven to be successful, but also just bringing people together in general is also successful.”

Amy was invited to share the results of the study with the Wentworth Heights newspaper group in mid-July, and the participants shared with her how much the club has impacted their lives and continues to do so.

“It’s a perfect example of why we continue to do what we do at the RIA,” Amy says. “I’m so happy that participating in a research project provided them with this opportunity. If a village and the residents are fully invested in a project, not only will the project be successful for the researchers, but it will bring many benefits to the village as well.”